Hello Kitty Meows in our Lives

Hello Kitty Meows in our Lives

Who and what is Hello Kitty? Hello Kitty is an iconic white cat with a red bow on her left ear. She doesn’t have a mouth, but she is absolutely “kawaii” (cute)! Aren’t you curious how Hello Kitty started to conquer the world? I haven’t seen a single city where you won’t find any Hello Kitty stuffs. Her face is all over the world. A lot of people collects Hello Kitty merchandises and yet, stores still have a lot of Hello Kitty things to sell, it’s like it never runs out. 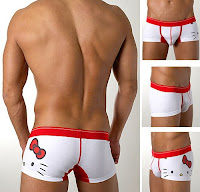 Girls of all ages love Hello Kitty. And I meant ALL. Infants, toddlers, grade-schoolers, teenagers, moms and even grannies. And who said that only girls and gays love the Kitty-cat? Several boys nowadays, are now proud to show the world that they love Hello Kitty. And that’s enough proof that Hello Kitty meows in our lives. Here’s a little biography about the world’s famous lovable cat. 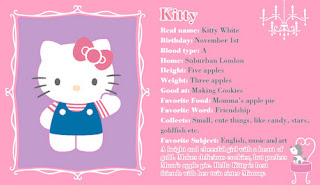 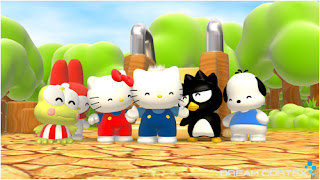 Japanese company, Sanrio invented and promoted Hello Kitty, but originally, Hello Kitty was born on London in 1974. At first she didn’t have a name. It was first seen sitting with a red bow on her left ear between a bottle of milk and a pet goldfish. After that, thousands of people in Japan got attracted to its cute design and character, and Boom! Hello Kitty turned into an instant celebrity.

Hello Kitty was very first featured in a wallet. A very tiny purse with a picture of Hello Kitty embroidered inside. Her family was first introduced in 1975. In 1976, they changed her first sitting pose into a standing pose. Hello Kitty’s Grandpa and Grandma first and formally appeared in 1979. Her first movie made is called “Kitty and Mimmy’s New Umbrella”. In 1984, Hello Kitty photo design was created. And with the huge success going on, US CBS television produced the first Hello Kitty Cartoon on TV, called “Hello Kitty’s Fairy Tale Theater”. Hello Kitty’s design was always the same from 1974 to 1992, until they finally changed her bow into a flower in 1993, for the first time. She’s now an ambassador in many countries, but she was first announced to be a child ambassador of UNICEF in the US. The first ever Kitty House Theme Park was opened in 1998. 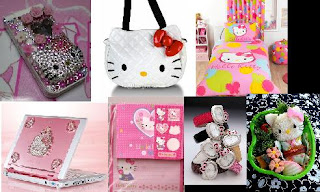 Creators of Hello Kitty never have known that this Kitty will be a global megastar. Did you know that sales of Hello Kitty merchandise now account for half of Sanrio’s $1 billion annual turnover? Hello Kitty products are sold in more than 60 countries.  There are gazillions of Hello Kitty products made, telephones, toasters, stationeries, stickers, pens, pillowcases, bed sheets, bags, dresses, notebooks, chopsticks, watches… You name it all! But there are also Hello Kitty items that are really cool to have.

1.       Hello Kitty Sausages
Don’t worry no cats were harmed for these sausages’ production. 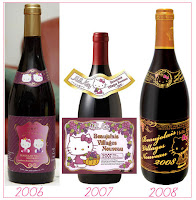 2.       Vintage Hello Kitty Beaujolais Nouveau
You could booze and have the bottle as a collection. 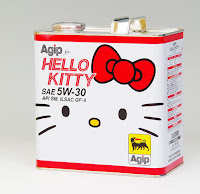 4.       Hello Kitty AR-15 Assault Rifle
At first I thought, “Will a soldier use this rifle?”, until I learned that an American only created this for a protest against a rifle ban proposals. 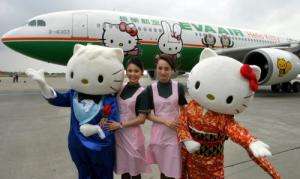 6.       Hello Kitty Airbus
A Taiwan carrier EVA Air started flying a Hello Kitty Airplane between Taiwan and Japan. You can’t really have this plane but it would be cool to ride in it.

7.       Hello Kitty Toaster
Now this is super cute. The toaster sears Hello Kitty’s face onto the slices of bread.

8.       Kitty Couture
You be extra-cute wearing a Kitty-inspired gown on your wedding or prom.

9.       Hello Kitty Apple TV
This TV would make a nice addition to your collection. 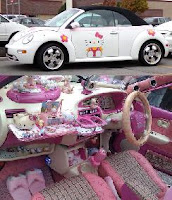 10.   Hello Kitty Mobile
People will be looking your way because you’re driving a pink Hello Kitty car. Too cute! 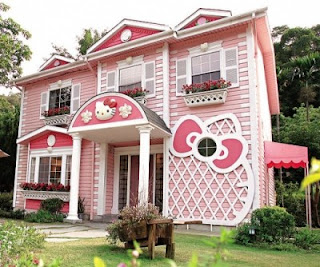 Hello Kitty really influenced a lot of people’s lives, don’t ya think? She’s been famous for nearly four decades. And she’s been the favorite cartoon character for generations. And I’ll be looking out for more new items featuring Hello Kitty. Meow!
Posted by Unknown at 9:33 PM